Where do I even begin? I’ve seen many shows and many awesome cover bands that play before the headliner comes out. These guys were all top notch in my opinion. Seeing these bands live is better than you can ask for.  The passion and energy coming out of these guys is ridiculous, especially when feeding off the energy of the crowd. Seattle doesn’t fuck around either. That’s something I love about the local music scene. You can play in the smallest sweatbox venue and you’re going to feel the love. If you get the chance to see Periphery on their Juggernaut tour, DO IT!!! It’s worth every dollar. In fact, I would have paid $100 to see this show. That’s how good it was. El Corazon is one of Seattle’s historical venues and yeah it’s small…. very intimate, but that makes for the best shows.

Super charismatic bunch that play with a trumpet, sax, violin, drums, bass, and guitar. Super eclectic mix of progressive metal and instrumental. You would think it would be a bit much to have all that in one band but they make it work and the lead singer, Salvatore Marrano, is such a cool guy and a pleasure to watch. The song that really captured me was “My Famed Disappearing Act“. What a great song. Uplifting to say the least. You guys really did great and Seattle loved you.

You can listen to it here:
(https://soundcloud.com/evilinkrecords/tysmfda)

These guys are so badass. I see a lot of comments regarding their lack of “heavy”. Not everything metal needs to be dark and indiscernible from one another. I like their direction and seeing them live is even better. It’s probably because I saw them live that I love them even more. Which is why I say support music and go to shows. I’m glad they’re with Metal Blade and as one person may not agree or like it, there are thousands that do. That’s all that matters. Due to the nice little pit and crowd surfing, they received a warm welcome here. I had the chance to meet Nick Hipa at their merch booth when I was buying their cd, “WOVENWAR”, which he signed. Super nice guy, very talented, and passionate. I’m so glad I got to see them on the Periphery tour. As I stated, if you can catch all these bands on this tour, GO. 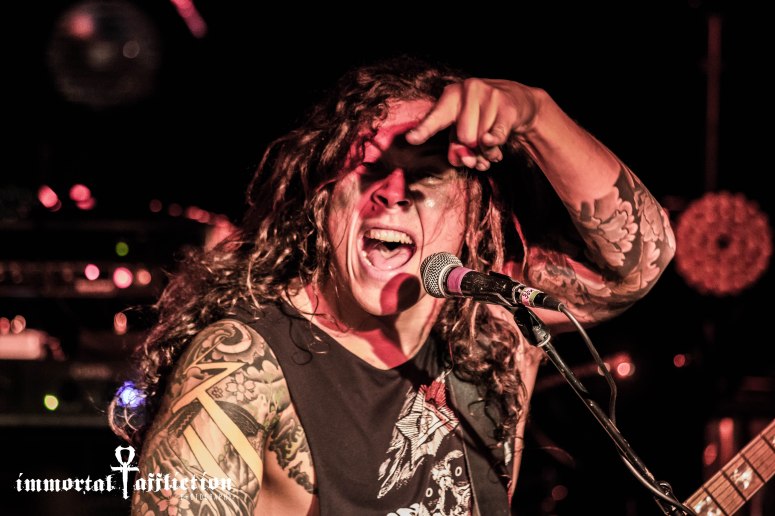 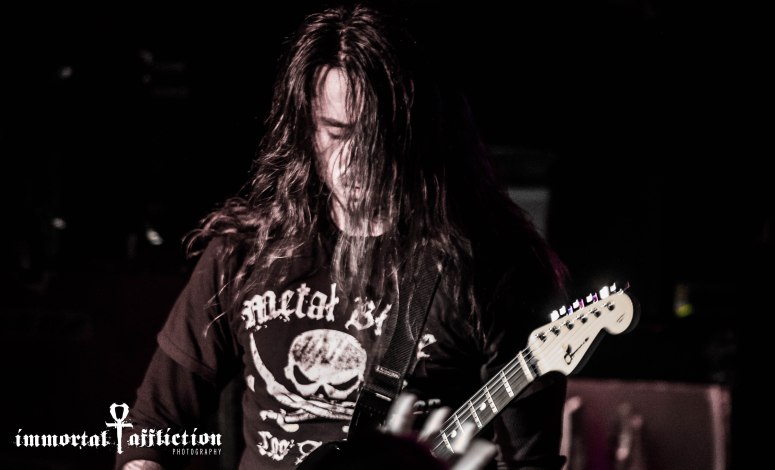 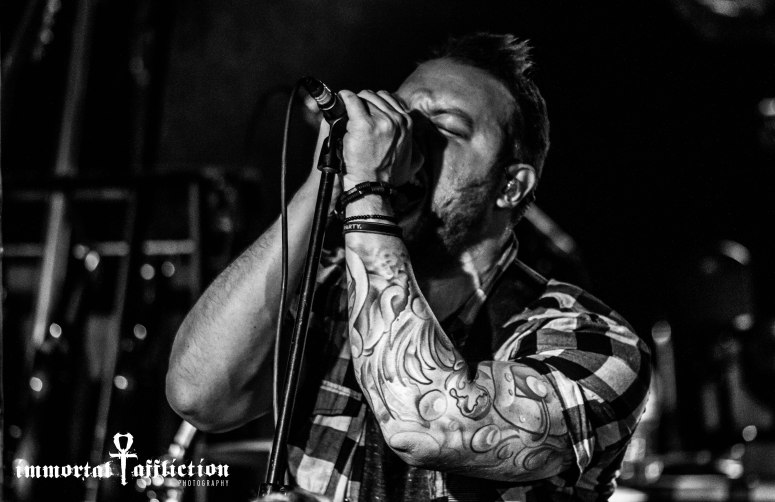 Holy shit at these guys. If I didn’t know any better I would have thought they were the headliners. Raw performance on progressive rock and alternative. Some shirtless action and some mind bending techniques involving a various apparatus in which a bass was installed upon and played by three members of the band, single drums set on opposite sides of the stage in which some tribal action looked to be taking place as a few members beat on each drum and then there was this epic performance that reminds me of skits on professional drum lines where they are playing each other’s drums.  Insane. I’ve never seen anything like it. The whole crowd was in an uproar (in a good way) when these guys performed their set. Stage diving, crowd surfing, and all the roars. I had never heard of them before this show which is another reason I love supporting live music, there’s just so much raw fucking talent out there that goes unnoticed and unseen, but at live shows you get to hear them and see them. Whoever put this tour together needs to pat themselves on the back. Nothing More is ridiculously amazing. I’m pretty sure Jonny Hawkins is Jim Morrison reincarnate. Geez. lol. The man oozes passion. I bought both their cds at the merch booth.  Check them out!!! 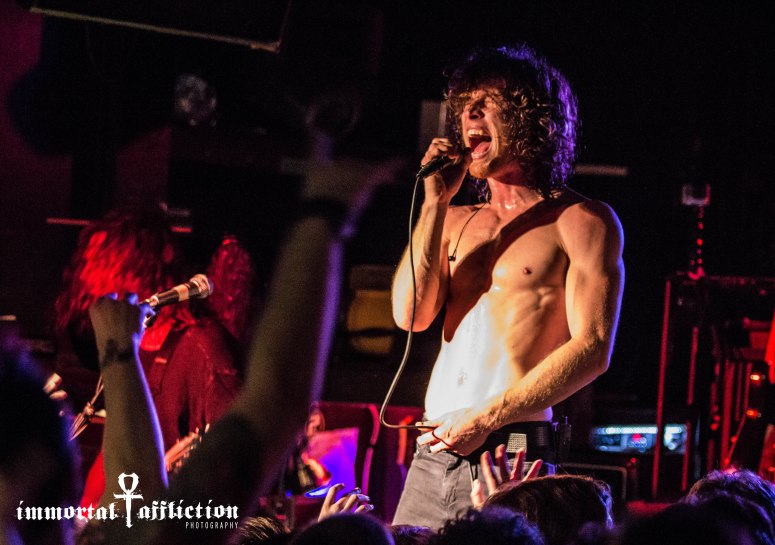 Check out this!!!! One of my faves. SALEM

An amazing end to an amazing show. The whole room went crazy. Pit action, stage diving, crowd surfing, and just overall awesome engagement from the band and the fans. I’ve never seen them live and I will say that compared to their studio album, I think they sound like two different bands on some degree. I definitely don’t mean this in a bad way, but it was a difference. Spencer singing live sounded more heavier and the deep visceral screamo growls seemed to encompass what I would have expected in the first place. I prefer them live. I would pay to see them live again. I do think he’s an amazing frontman who looses himself in the music and I can tell that during his performance. All the guys are really awesome and I’ve become a genuine fan. They also brought some amazing light action in their production. The venue isn’t necessarily equipped with the greatest lights in the world, so it was nice that the band brought their own. It really helped my pictures come out badass. 🙂 Thanks guys. You picked one of the best tour combo’s I’ve ever seen. By the end of the show we were chanting for “ONE MORE SONG.” The drummer was hysterical when he came out and played a beat to our chanting. Spencer Sotelo (lead vocal) gave us two more songs. That’s just how we do in Seattle. Bands won’t leave without having to play an encore! Congrats to you all. 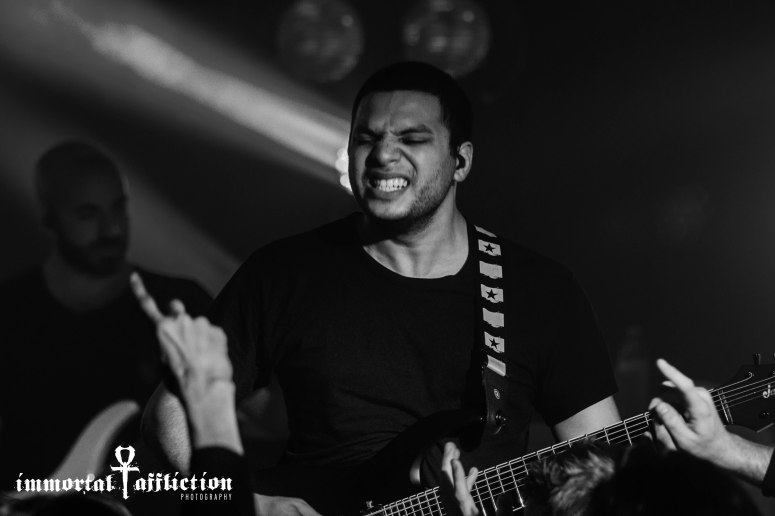 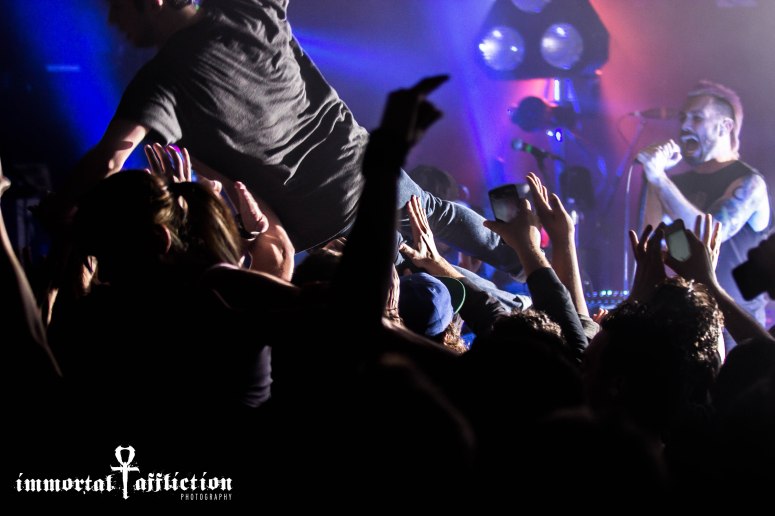 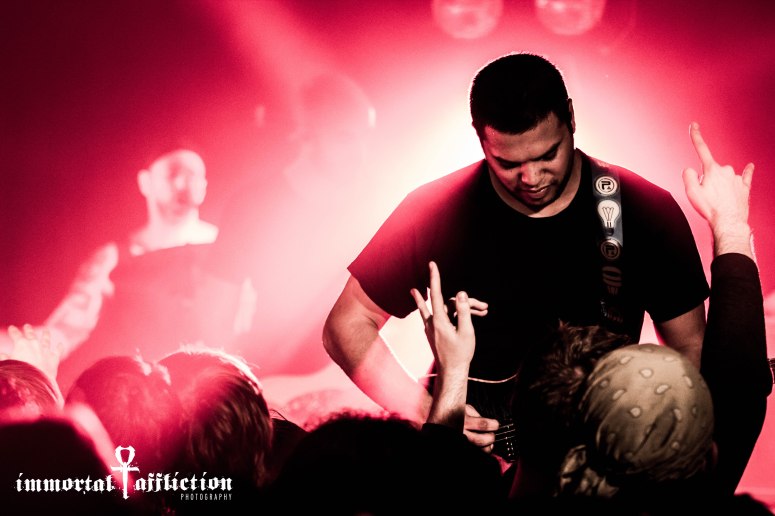